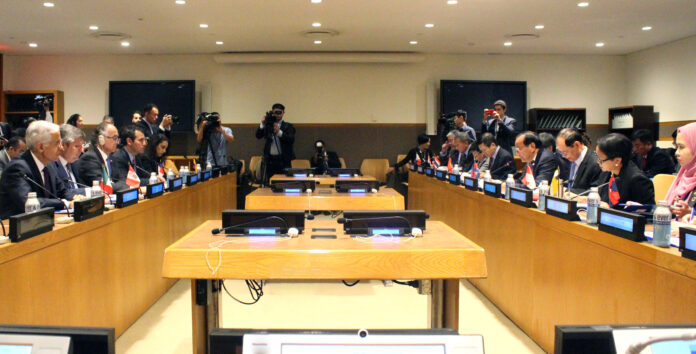 ASEAN and the Pacific Alliance emphasized their commitment to forge stronger ties between the two regional mechanisms during the 6th ASEAN-Pacific Alliance Ministerial Meeting held on 28 September 2019 on the sidelines of the 74th Session of the United Nations General Assembly (UNGA) in New York City, USA. The Meeting was co-chaired by H.E. Mr. Prak Sokhonn, Deputy Prime Minister and Minister of Foreign Affairs and International Cooperation of the Kingdom of Cambodia, and H.E. Mr. Teodoro Ribera Neumann, Minister of Foreign Affairs of the Republic of Chile.

The Ministers noted the recent developments in ASEAN and the Pacific Alliance, including the outcomes of the 52nd ASEAN Foreign Ministers’ Meeting and Related Meetings, the 34th ASEAN Summit as well as the 14th Pacific Alliance Summit. The Ministers took note of the key priorities of the Pacific Alliance Pro-Tempore Presidency which are reflected in the Lima Declaration signed in July 2019. The Ministers reaffirmed the importance of strengthening the cooperation through, inter alia, ministerial meetings on the sidelines of the UNGA in order to boost relations as well as to develop initiatives in dealing with regional and global issues for the benefits of the two regions.

Cognizant of global challenges such as an increase in protectionist measures, effects of climate change and the Fourth Industrial Revolution and Artificial Intelligence (AI), among others, the Ministers emphasized that countries and regions should cooperate and share best practices that support resilience and innovation in the Asia-Pacific. They also stressed the importance of promoting free trade and reaffirmed support for the open, rules-based multilateral trading system as embodied by the World Trade Organization as well as stressed the importance of supporting Micro, Small and Medium sized Enterprises since they play a significant role in both ASEAN and the Pacific Alliance.

The Ministers reviewed the implementation of the ASEAN-Pacific Alliance Work Plan (2017-2019), welcomed its extension for another year to December 2020 and agreed to expedite its implementation. While recognizing the existing four areas within the ASEAN-PA Framework of Cooperation that was adopted in 2016. Likewise, the Ministers underscored the importance of expanding cooperation to cover areas of mutual interests such as trade facilitation, smart cities, digital economy, disaster management, renewable energy, connectivity, addressing climate change, and combating plastic debris. Towards this end, the Ministers tasked officials to look into the development of a new Work Plan.

The Ministers recognized the importance to enhance efforts to achieve greater connectivity between the two regions via trade, tourism and people-to-people exchanges. In this regard, the Ministers encouraged utilizing technology such as video conferencing to increase contacts between both sides.

The Ministers extended their warmest congratulations to the Philippines for being conferred the status of Observer State of the Pacific Alliance at the 14th Pacific Alliance Summit held in Lima in July this year, joining Indonesia, Singapore, and Thailand.ASEAN Ministers also congratulated Chile for its upcoming hosting of the 2019 United Nations Climate Change Conference (COP25) in December this year. Similarly, they welcomed Chile as the newest Development Partner of ASEAN and the accession of Peru to the Treaty of Amity and Cooperation in Southeast Asia (TAC).